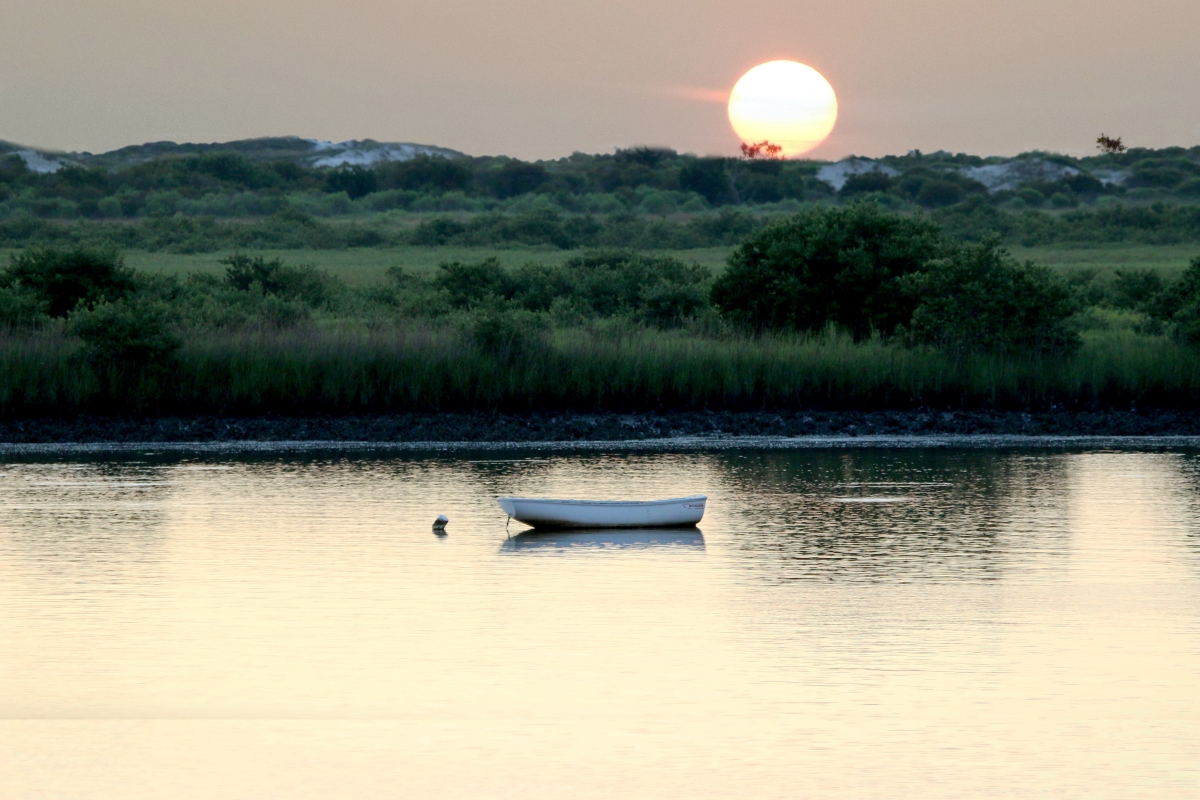 It is easier, I think, to argue for the existence of God while standing in a well-tended garden. This garden entrance is well tended,
Suggesting a pleasing view behind.
Yet I dare not try the latch
For fear of disappointment.
Some doors, you’ll agree, are best left closed,
For heaven’s allure is strongest when veiled. 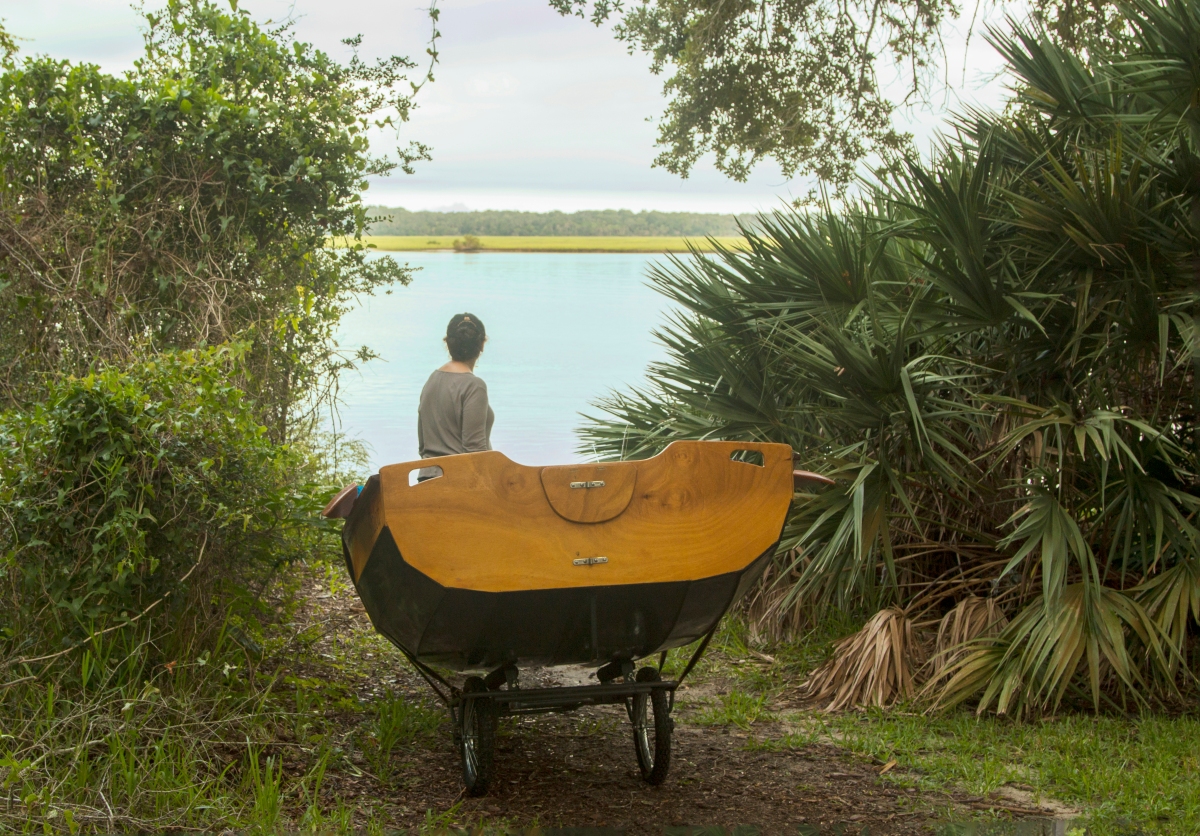 One morning every two weeks more or less, when the falling tide aligns with the rising sun just right, Elaine and I wheel our homemade dinghy down to the end of our street where it meets the sandy bank of the Tolomato. We launch the boat there and row across the river to Indian Creek where we explore and map its several winding navigable channels and their shallow branches that slice through the marsh’s cordgrass; where we marvel at the heron, and the ibis, and the stork that hunt knee deep in the shallow waters near oyster bars and take flight with wing-beating haste as we draw near; where we seek out promising locations to fish for mangrove snapper, spotted sea trout, and black and red drum.

You would not think it, but each and every boating morning, upon climbing out of sleep and as I wait for daylight to leak into night’s darkness, I listen with languid longing for the sound of rain or of strong wind so that I might whisper to my wife that we must cancel our outing and that we might console ourselves in a second sleep.

Fortunately, the gods care for me to the extent that they rarely provide me with a heavenly-excused absence from our undertaking. They are better aware than I that the audible snap of bone against bone as my legs slide from under the covers and bend over the bed’s edge and that the satanic tingling in my left foot as it touches the floor are indicative of the indisputable truth that the greater part of my life stretches far behind me, and yet so much of our understanding of Indian Creek lacks sufficient detail. They are also better aware – praise them – that the taste of eggs, and bacon, and strong coffee prove more gratifying and flavorsome when consumed as Elaine and I pencil in the latest additions to our master map upon our return later that morning. In the woods at the back of the house,
The young girls stand amidst the oaks,
Their eyes raised to the leafy canopy above them.
They do not move, nor do they speak.
They hear only the tap, tap, tap sound up and to their left.
They search for the drummer’s location.

By the door at the back of the house,
The grandfather watches the girls in the woods.
He hears a woodpecker at work.
He does not move, nor does he speak.
He chases an ethereal notion
That the girls, and the oaks, and the woodpecker are one. As day breaks in the summer
When the sun is at its farthest point north,
The boundary between my bedroom world inside
And my garden world outside
Steadily weakens in the glass doors to our backyard deck
To the point where my wife is able to dress
In two realms at the same time:
Here by the bed next to me
And there under our oaks amid the red salvia. Behind Nix Boatyard and up Oyster Creek, across from the southeast corner of Creekside Restaurant’s dirt parking lot, past the wood pile, through the trees, and over the damaged docks lining the creek on this bank, clean over to the landing on the creek’s far side, you will see, should you choose to look in that direction upon exiting your vehicle, the two-masted schooner, Resilience out of Rhode Island. Under repair by its owners after being battered in October’s hurricane, Resilience will not set a northward course home for at least one more month. However, you might predict – and more than one seaman has already agreed  – that, once she is under full sail, she promises to be one of the most beautiful sights afloat. Furthermore, you may, however briefly, be filled with calming courage and a spirit of adventure, and square your shoulders with casual confidence and determination as you stride toward your appointment for dinner. She had expected an orange horizon over Salt Run’s eastern dunes as a prelude to the sun’s arrival. But as she stepped up onto the deck, she was greeted instead by a dense fog rolling in over those same dunes, hiding any evidence of daybreak, hiding any evidence even of the waterway 100 meters from where she had moored her sloop.

This fog was a very big problem for her, one with classic domino consequences. She was scheduled to set sail early this morning; a must-do if she expected to anchor in Melbourne by dark. And, if she didn’t make Melbourne today, then she wouldn’t make West Palm on Tuesday, and then she wouldn’t make Miami on time, and so on all the way down the line of ports of call to Cienfuegos. A prearranged, prepaid drop-off to a contact at each port; assurances given; no way to update the other players: no phone numbers, no email addresses (too risky, she had maintained).

The fog would have been but a manageable inconvenience had she followed the itinerary she herself had drawn up and moored in St Augustine Harbor (well dredged, well lit, well marked, open) instead of this tributary (quieter, able to relax, catch up on sleep).

But, here she was, and the fact remained that she did not know Salt Run’s narrow channel well enough to maneuver safely in the very limited visibility available, especially not with this cargo. She rummaged through her memory for elements of a plan B, a trick to get her boat to the inlet blindly without grounding, but its futility was made evident by the spinning in her head of unrelated, random memory fragments and increasingly fantastic and frightening images of what might be her near future. She remained helplessly stuck in her mind’s dangerous gyre with only one small remaining rational part of her watching objectively as her nightmare unfolded. That part eventually concluded that there was nothing she could do presently to influence the course of upcoming events.

There was nothing to be done.

Oddly, the tension in her gut loosened. Her breathing deepened, slowed. She regained some control of her reasoning ability. She found that she was comforted by the silent fog that swirled about her. She lingered where she stood. She felt the Earth-bound cloud caress her face, her neck (moist, cool, refreshing). She became mesmerized by the sight of suspended water droplets in the beam of a deck light (millions – no, more – countless). She tracked the fog as it thickened here and thinned there and then reversed itself as it swirled and drifted southwestward slowly, slowly.

She heard a whispering somewhere below her, so she leaned over the railing to find its source. She saw that it was the current, and it spoke to her softly, unhurriedly, even as it slackened in the turning tide, its message further quieted in the heavy, water-thickened air. It told her that she was safe for now. It told her to ponder, for now, her place in this world of hers right here. It told her that this was enough for her for now. 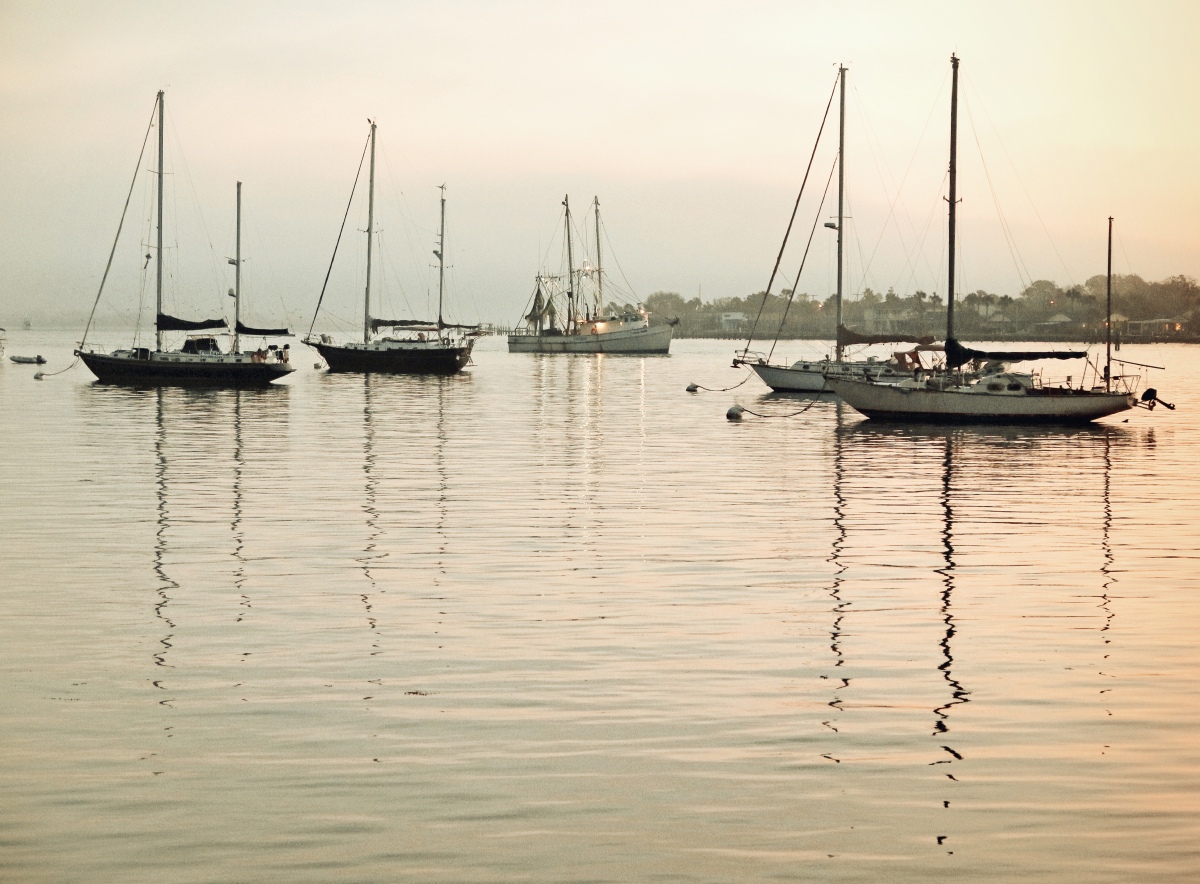 Sunrise is an hour away, though the sun won’t be seen by anyone in or around St. Augustine Harbor this morning: the incoming fog will see to that. The crews of the moored boats will slumber below decks longer than usual while the watery air muffles the usual a.m. sounds.

The Nasty Habit’s engine revs, then idles, then coughs and revs again, her captain endeavoring to keep her from drifting back into the inlet as he waits for the Bridge of Lion’s master to raise the bridge’s central section. The boat’s belly is fat with shrimp, both more so and sooner than most days, so she is heading home early, sated. The crew, to a man, is sharp awake and diligent in their duties, though each steals a look toward the buildings along the quay to the far side of the bridge, and each constructs his own day’s promise.